This past week Liam and I traveled to Blissdom Conference 2013, a blogging conference for women that was held in Dallas, Texas on March 21-23rd. If you want to read about Blissdom 2012, I did a recap here. 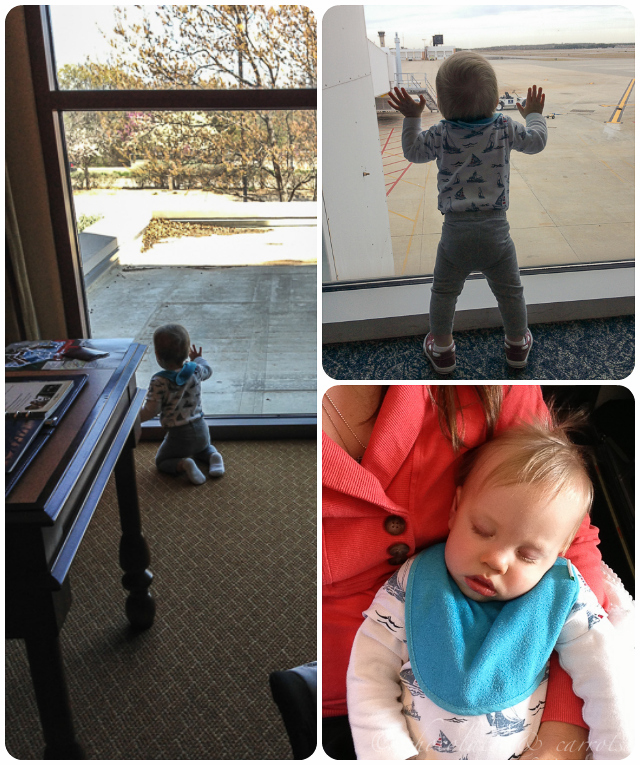 We headed out on our adventure on Wednesday (March 20th). We got settled in at the airport and had an hour before our flight left. Liam did so great on the flight and got a 30 minute nap midway through. However, that was the ONLY nap he got all day long. Help me! Seriously, though, the plane was one of those tiny ones where there’s one seat on one side and two on the other. Tiny! Luckily, the woman next to us was baby friendly…I can’t say the same thing about the guy sharing the row with us. 😉

Anyway, once we arrived at the Gaylord Texan, we had some downtime to settle in and get organized. I ordered the lovely salad below…don’t even ask how much room service costs. You’ll pee in your pants, just like I almost did. Oye. But, you gotta eat! 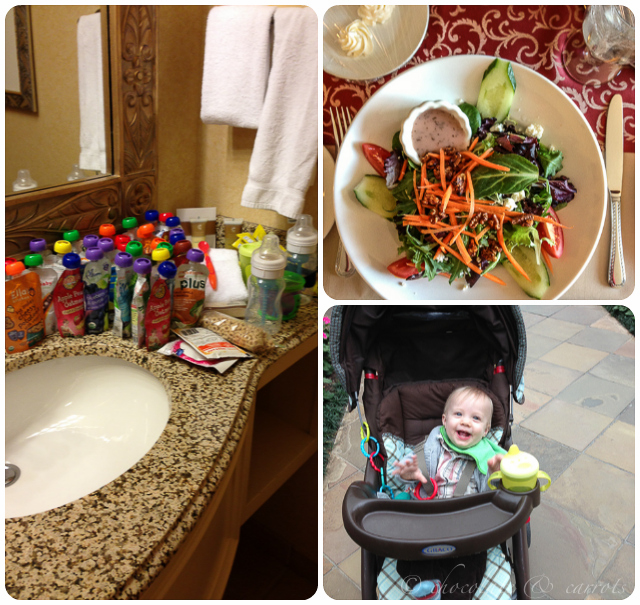 I’m so grateful to Erica for letting us borrow her stroller and pack ‘n play! There’s no way we would have made it without them. 😀

The actual hotel is gorgeous. It’s very Texan and the constant white noise effect of the water features throughout the hotel were quite relaxing for Liam. Hello, naptime! 😉

As compared to Blissdom last year when it was held in Gaylord Opryland, the Gaylord Texan is SO much easier to get around in. I can’t tell you how lost I got in Opryland. The Texan has just one big Atrium, making it the perfect place to act as ‘homebase’. 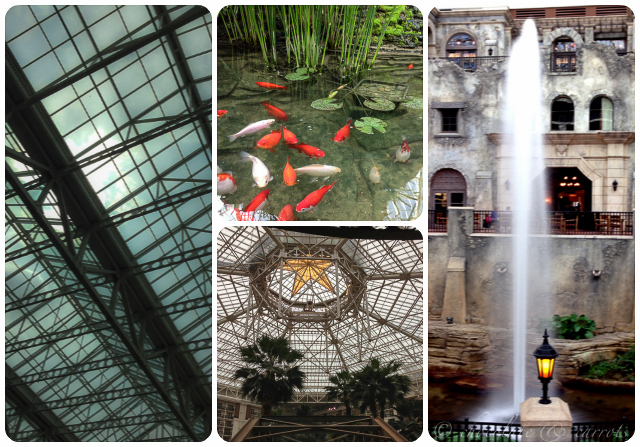 The downside of a smaller hotel, is fewer food options. Being a foodie, I was disappointed at the lack of options. Those of you who follow me on Instagram saw very little food photos…especially dessert because there just wasn’t a great place to get them! 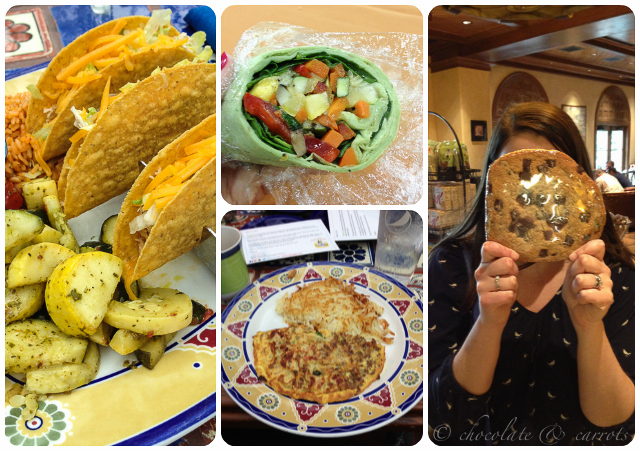 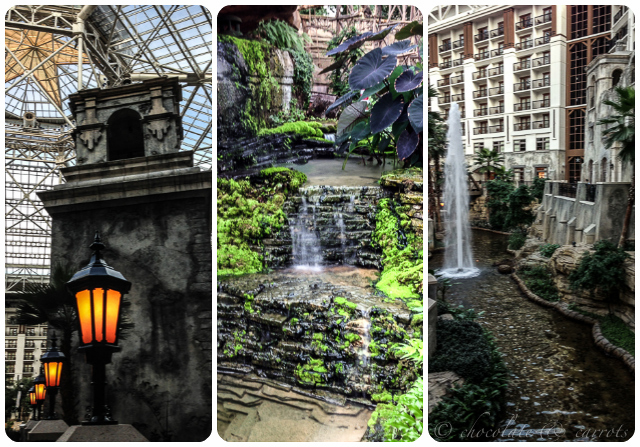 Well, coming a day ahead of time worked out really well. It allowed Liam and myself to get acquainted with our new surroundings and we were able to have a some what normal routine.

On Thursday (March 21st), we had breakfast with Natalie and baby Micah from The Busy Budgeting Mama. Check out our matching baby butts! 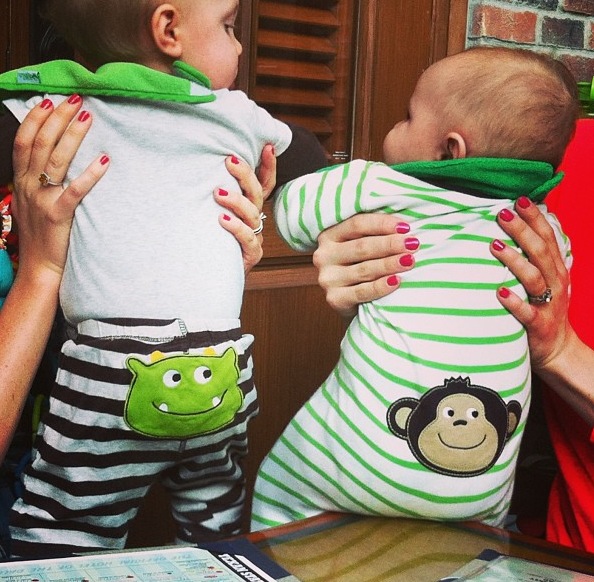 I was also able to let Liam take a somewhat normal nap in the dark hotel room, while I got some work done. 😀 Of course, we had to let him have a fun bath time too! 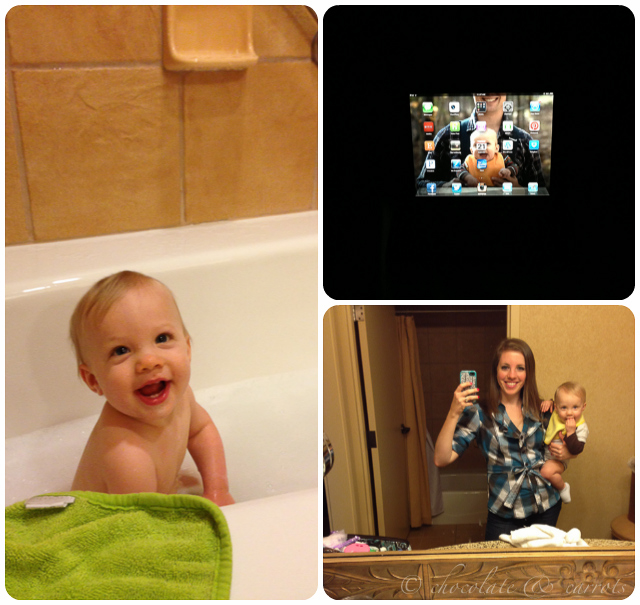 That night after the kick off event, Liam, Jennifer and I explored some of the sponsor’s booths. Oh, did we have fun! 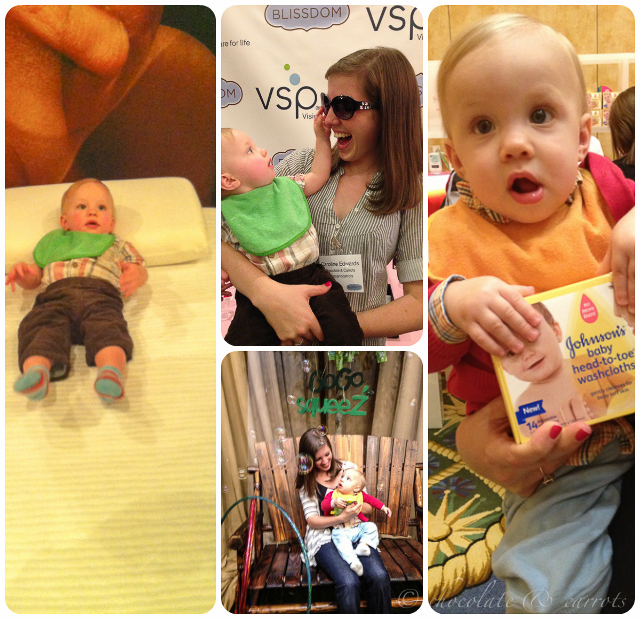 Side Note: If you’ve ever had a mobile child, it’s really hard to not let them be mobile. Any time we had the option, I’d let Liam crawl around and pull up on things. That being said, I’m a germ freak, so I had to let my germ guard down for this trip. We were both so exhausted at night that Liam had to get baths in the morning. 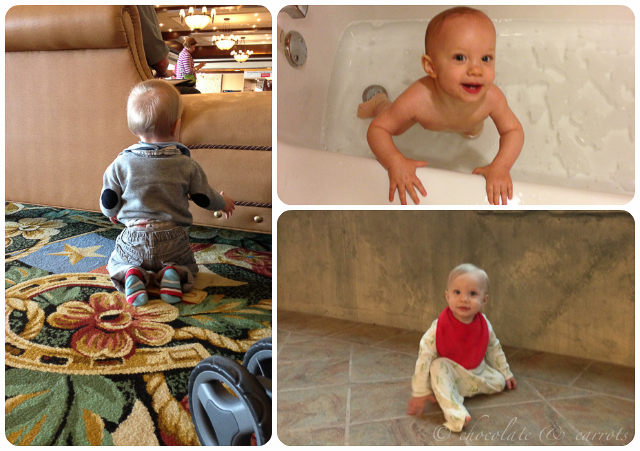 The next morning (Friday the 22nd), we were up bright and early for breakfast with Dr. Smiths! Friday and Saturday were both filled with lots of talks and visits to the sponsor booths. There wasn’t a minute to spare.

Since we were go-go-go all day, the k’tan was such a blessing. Liam refused to nap in the stroller. There was just too much to look at. But, with the k’tan, he’d take 3 thirty minute naps every day. I was lucky if those naps fell during a session, so I could listen. Thank goodness for Bliss At Home so I can dive more deeply in what the fabulous speakers had to say! 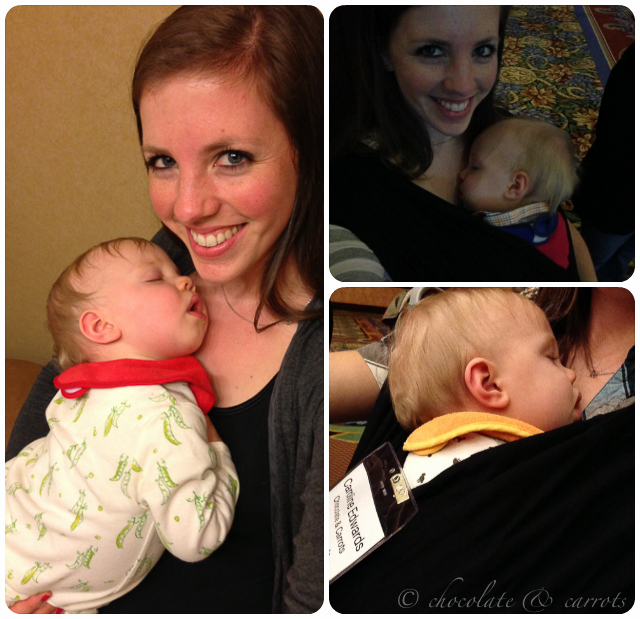 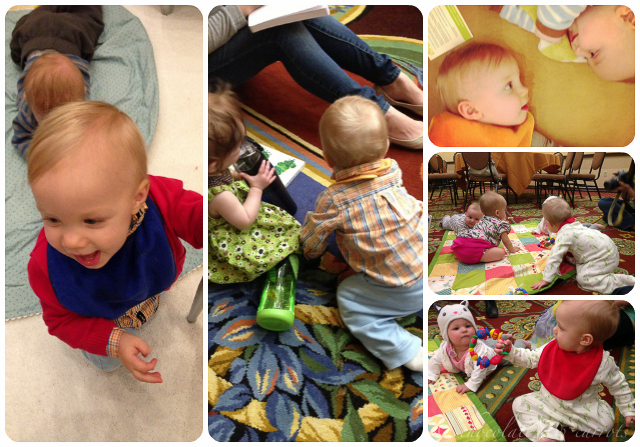 I made new friends too! Like Courtney, Natalie and Jenny (please excuse my awful hair…poop on those frizz pieces from having Liam)! 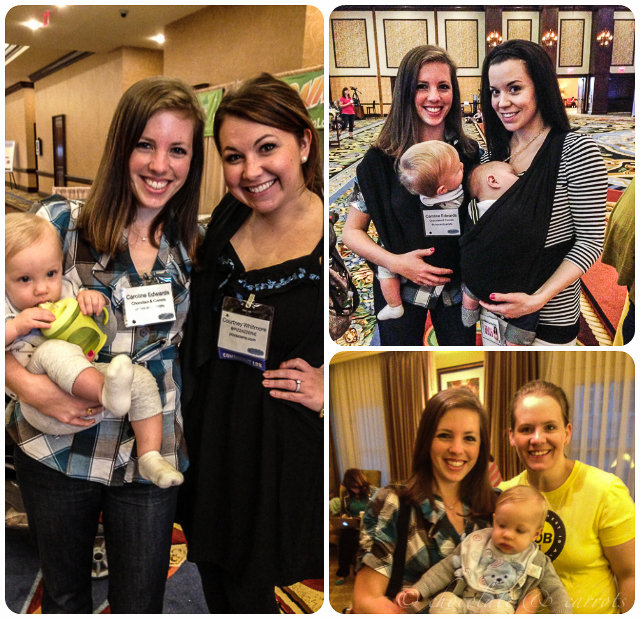 On Friday night we had a little Mommy-Baby playdate for those of us who couldn’t go to the Girl’s Night Out Party (our babies had a few years before they were 21 years old). 😉

Here’s all 8 of us mommies and our babies! 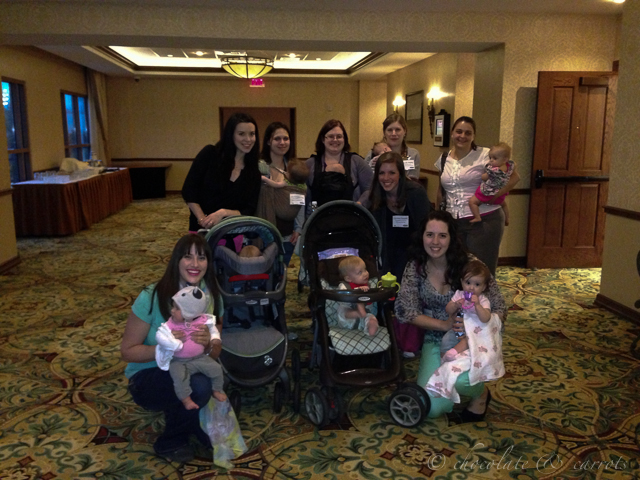 And why not, I threw in some extra photos of little Liam and strollers. He was the stroller king. If he wasn’t in it, he was climbing on them and trying to eat the wheels…eww. 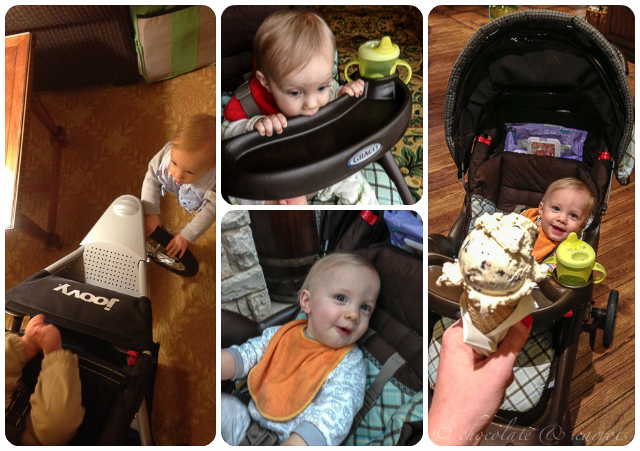 On Saturday morning, we had a great get-together hosted by Jenny and the BOB Moms for mommies and babies!

We had another whirlwind of a day and in the last session Liam slept for most of the time, but I had hit a wall and needed caffeine to focus. I hung out with the girls for a few minutes before heading to the One2one Network suite to grab a coffee. As soon as I walked in, Amber and Mary Ellen (two amazing One2One Network gals) surprised me that I had won an iPad! Whaaaa?!? I was beyond excited. No caffeine required anymore! I went back to the room to grab a few essentials and headed to the closing keynote. There, I spent a good bit walking the hall trying to get Liam to nap and it finally worked! Thank you again k’tan! Afterwards, I had a lovely dinner with new friends, Nancy, Jennifer and Natalie. 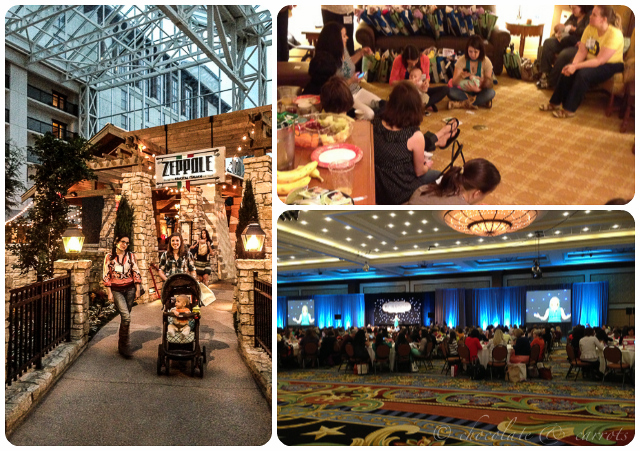 Finally, we loved our last time bit of together at the Girl’s Night In party, eating chocolate popsicles and staring at a clear dishwasher. Liam was so exhausted he fell asleep soon after we got there. Poor little guy. 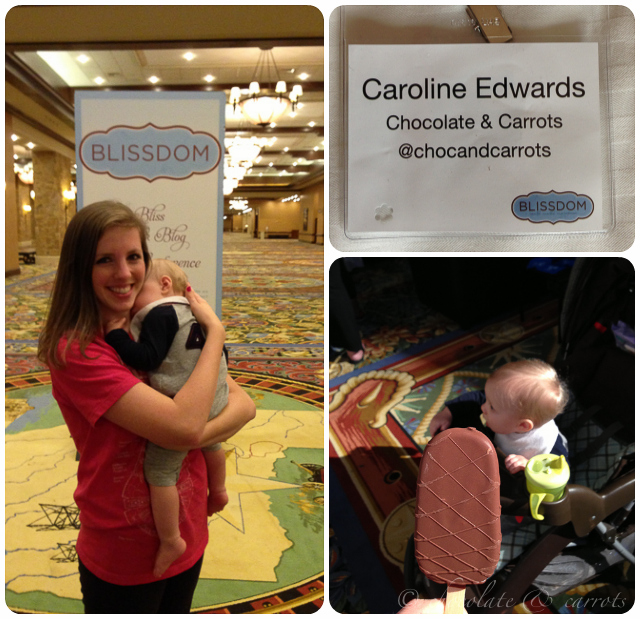 On Sunday, we got a nice big breakfast with Jennifer then headed to the airport. Our driver was such an inspiring man, having immigrated to the United States from East Africa as a refuge and worked his way through college and is now working two jobs to put his daughter through college. Really put perspective on things. I really have such a high respect for hard workers like him.

After the incredibly nice gentleman dropped us off at the airport, it was time to go through security. Luckily, our checked bag was only 1/2 pound over weight…oye…no wonder I had to sit on the luggage to get it to zip!

So, here’s where I have a love/hate relationship with airport security. I love that they are truly trying to make flying safe, but seriously? You choose a 26 year old mother traveling alone with a baby to do a thorough investigation on? Okay. So here’s how that went:

Liam was sound asleep from the car ride to the airport. I had to wake him up and put him in the k’tan from the car seat. I then proceeded to hold up the line while I unloaded all of our belongings into the bins. I had two carry ons (all baby stuff), a car seat and a car seat cover. I made it through the metal detector where they wanted to check my hands…I guess for explosive materials?…I was clear. Then, I went to go collect my things, when I noticed that one of my bins was in another lane…I was the chosen one. Ugh.

They took us to a separate spot in security, where I had to take Liam out of the sling, put him back in the car seat, take everything non-essential off of my body (scarf, belt, etc) and be thoroughly touched…in places I’d rather not be touched…in front of a mess of people. Meanwhile, Liam was getting fussy in his car seat which was a few feet away from me, while a bunch of other people were taking everything out of my bags and testing them. So, they managed to thoroughly fluster me, aggravate my baby, and screw up my system in my bags for the necessary in-flight items to keep Liam happy.

All I have to say, is I’m glad that I got to the airport an hour earlier than scheduled.

So yes, as you can see below, Liam was oh so happy in the airport. Not. I could barely scarf down a veggie burger before boarding. 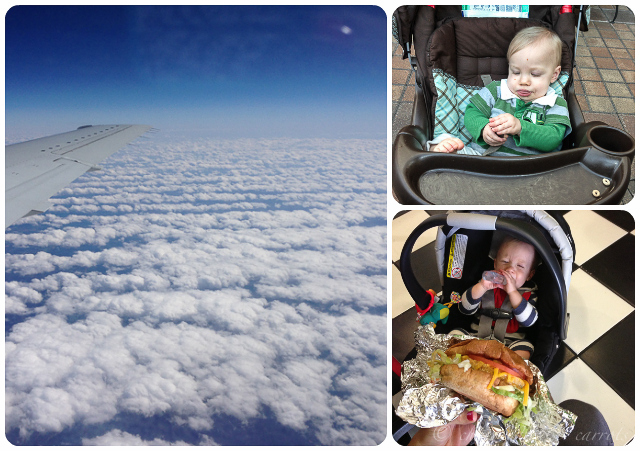 The only saving grace was that a super nice man let us sit in his row by ourselves. Glorious! The down side was that Liam wouldn’t nurse or take a bottle on the decent, causing him to scream for a good 30 minutes until he cried himself to sleep. 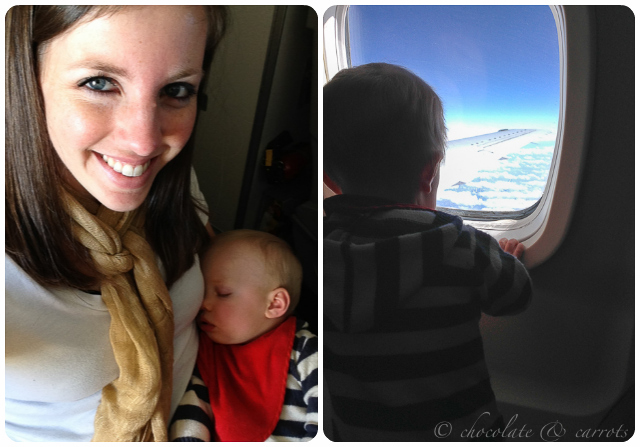 Overall, it was a great trip and I’m a better person for going. I learned a ton…mainly about what I can handle and that there are so many nice people in this world. It was hard to get actual education from the conference because I had a baby in tow, but the friends, connections and experiences were all worth it. I’m so blessed to know and work with such amazing women at Blissfully Domestic. The Bliss Chicks rock!

If you want to see some of my new friend’s blogs, check them out here:

I was given a baby k’tan to use at Blissdom by Baby K’tan. My travel was partly compensated by Blissdom.