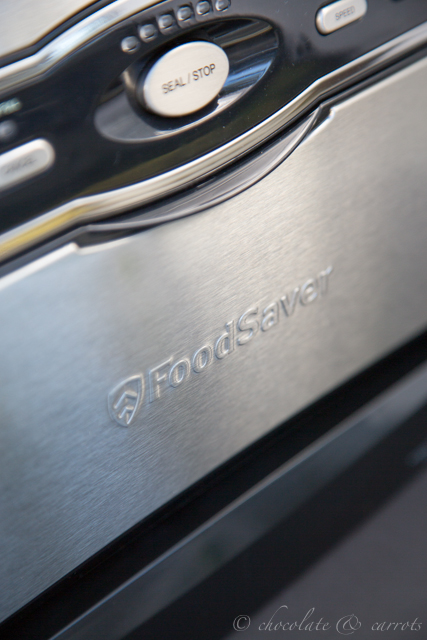 Where was this machine when I was preparing to have a baby?! What a good way to safely freeze your food. I know I’m always a sucker for the ‘as seen on tv’ aisle at Target and I’m guessing the FoodSaver is just too big to go there and that’s why I didn’t get one until now. 😉

Seeing as though I tend to make a lot of extra breakfast foods on the weekends, I like to freeze them in individual bags for easy weekday breakfasts. So, the FoodSaver has really come in handy for that! It really is a great idea for people who have an extra freezer at their house. Wishing I was one of them!

So let’s talk about how it works.

The FoodSaver has a place inside the machine to store your roll of plastic (which is a special FoodSaver product) and cutter to measure just the right amount for your food. You cut a piece of the plastic bagging that is at least 4 inches longer than the food that you’ll put inside the bag. Using the seal button, seal one end of the bag, place the food in the bag and use seal and vacuum the other end of the bag. The buttons are pretty self explanatory, too.

Initially, I was concerned about the waste the bags would be if I could only use them once, but if you’re careful how you cut you can take what you need out of the bag after it’s been frozen and just re-vacuum and seal up the remaining food. You can also cut off of the sealed end and wash and air dry the bag and use it again. Sounds good to me! 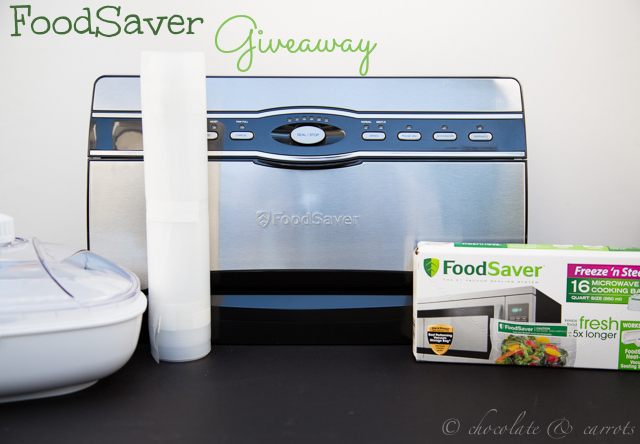 I wish I was all coupon-queen and stocking up on fresh meats and vegetables that I could store in the freezer for a rainy day, but I’m just not that good. However, I hope that some day we’ll have a large enough garden to where we can harvest enough food to freeze for the off season. And I guess we’ll have to invest in that extra freezer then too, eh? 😉 Oh, and with veggies, you may as well grab some of the FoodSavor Freeze ‘n Steam bags so that all you have to do is pop them in the microwave from the freezer, just like you do with the steam-in-bag frozen vegetables from the grocery store!

You can basically freeze anything, but here are some more things you can freeze:

I haven’t tried it yet, but another cool feature is the quick marinator accessory (that plastic container on the left) that marinates meats and vegetables in minutes rather than hours. Sweet!

Unfortunately, I don’t freeze food on a regular enough basis to give me an excuse to make the FoodSaver easily accessible to me since it is so big and heavy. I’m guessing it weighs at least 5 pounds and is at least 1 foot in length. I just don’t have the cabinet space to house it for regular use. For now, it has a lovely little home in my laundry closet until I make an exception to go FoodSaver-bag-crazy and stock up my freezer.

I will say, over my time as a married woman, I have thrown out too many pieces of freezer-burnt bread (yes, I freeze my bread. It lasts longer!). It would have been nice to not have to worry about that.

Like I said, I’m not sure if I would personally buy one since I don’t have an extra freezer and don’t tend to stock up when things go on sale. However, if I did want to take the extra time to coupon and look for sales (which I totally should do more than I already do), the FoodSaver would be a good investment.

No purchase necessary to enter. Prizes will only be shipped within the United States. Winner will be selected at random by rafflecopter using Random.org. All entries received after the giveaway closing day and time will not be considered. Entries that do not follow the entry requirements will not be considered. Winners will be notified via email and will have 24 hours to confirm receipt of the email. If the winners do not reply within 24 hours, another winner(s) will be selected. Giveaways will be mailed to the winners’ address.  This giveaway has been sponsored by Food Saver. I received a FoodSaver system to review for this post.  All opinions stated are my own.